Hanukkah (or Chanukkah) is the Jewish Feast of Dedication or "Festival of Lights."

Hanukkah lasts eight days during November or December. Hanukkah remembers the time when a miracle happened in the Jews’ Holy Temple.

Antiochus IV was a ruler who was cruel to the Jews and killed many of them. He placed a non-Jewish priest in the Temple. He showed disrespect to the Holy Temple by sacrificing pigs inside it. Mattathias and Maccabee were two Jews who led the Jews in many battles against their enemies. The Jews (called the "Maccabees") were able to drive out the foreigners from their land. They found the Temple was in very bad shape. So, they cleaned it up and re-dedicated it. However, they could not find enough oil for the Menorah, a special lampstand. Yet, the small jar of oil burned for eight days, until more oil could arrive to refill the Menorah. From then on, Jews have remembered this miracle by lighting a special Hanukkah menorah for the eight days of the holiday. 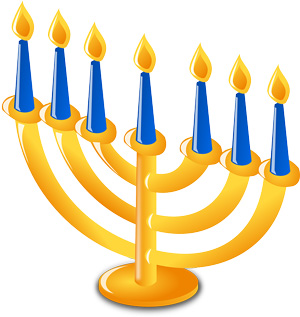 Some Jews celebrate Hanukkah with gifts, like Christians do on Christmas. But, originally, Hanukkah had nothing to do with gifts. Christians are not commanded to celebrate Hanukkah but it can remind us that Jesus is the One who has given light to our lives and eternal life, through His death and gift of salvation to all who believe in Him.

Bible Truth
"Jesus spoke to the people again. He said, 'I am the light of the world. Anyone who follows me will never walk in darkness. They will have that light. They will have life'" (John 8:12).


Your Next Move!
What do Jews believe?